Ammo Pouch- One or two pouches for the weapon you take to the field. You need to have at least one, though two is better! For Mosin Nagant rifles, ammo is to be carried in either the leather 2 pocket style ammo pouch (not the late-war impregnated canvas/fake leather M44 style!) or canvas bandolier. For any of the submachine guns, there are cloth magazine pouches holding drum magazines or long-style magazines. The SVT-40 uses a special leather pouch holding two magazines, but a Mosin Nagant pouch was frequently carried on the other side to reload the SVT-40's magazines with loose rounds between firefights. 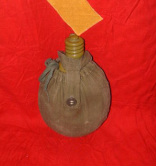 Canteen- A metal canteen with khaki or greenish cover. Most post-war versions are acceptable, as the Red Army used the same pattern up until the 90's.

Gas Mask Bag- A relatively common item for the Red Army soldier to have, they frequently didn't carry a gas mask! The clever Red Army soldier would ditch the gas mask and use the bag to carry things like food, extra ammo, personal items, etc. Some models of post war bags are fine; hunt around on eBay or other online retailers to find one.

Plasch Palatka- The Russian soldier's rain cape. Post war ones exist, but are tricky- only try to buy one that has leather rivets (reinforcing around the corner holes). Wartime ones are also common, and still relatively cheap.

Myeshok- An ingenious item, this was issued to some Russian soldiers to carry whatever they could in the bag- food, overcoat, spare uniform, etc. Reproduction and original ones are out there. Post-war ones also exist, but will require some simple converting first.

Mess Kit- Standard issue mess kits for eating out of. Look exactly like German WWII ones, but in a sand color. You should get a wooden or metal spoon to go with it as well. A small, simple steel pot was also widely used.