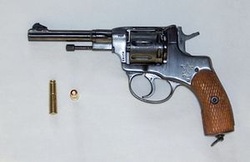 The Nagant M1895 Revolver
Is a seven-shot, gas-seal revolver designed and produced by Belgian industrialist Léon Nagant for the Russian Empire. The Nagant M1895 was chambered for a proprietary cartridge, 7.62x38R, and featured an unusual "gas-seal" system, in which the cylinder moved forward when the gun was cocked, to close the gap between the cylinder and the barrel, providing a boost to the muzzle velocity of the fired projectile and allowing the weapon to be suppressed (an unusual ability for a revolver). 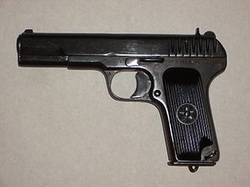 TT33 pistol
In 1930, the Revolutionary Military Council approved a resolution to test new small arms to replace its aging Nagant M1895 revolvers. During these tests, on January 7, 1931, the potential of a pistol designed by Fedor Tokarev was noted. A few weeks later, 1,000 TT-30s were ordered for troop trials, and the pistol was adopted for service in the Red Army.
But even as the TT-30 was being put into production, design changes were made to simplify manufacturing. Minor changes to the barrel, disconnector, trigger and frame were implemented, the most notable ones being the omission of the removable backstrap and changes to the full-circumference locking lugs. This redesigned pistol was the TT-33. Most TT-33s were issued to officers. The TT-33 was widely used by Soviet troops during World War II, but did not completely replace the Nagant.

This rifle was the mainstay of the Red Army in World War II. It's a sturdy, rugged bolt-action rifle firing the powerful 7.62R rifle cartridge. These rifles come in both rounded receivers and octagonal receivers (usually referred to as hex receivers). The hex receivers generally feed better, as do rifles produced prior to 1942. However, any year rifle will work fine. Also available is the sniper variant.

Please obtain one of these before buying any other weapons, even if it is just as a back-up weapon; where as other more complicated weapons may fail, the trusty Mosin Nagant never will.

It was soon realized that the M91/30 was too long and heavy to be useful for troops who would not always be in direct combat or where overall weight needed to be kept at a minimum; such examples of troops who needed a lighter weapon were the airborne paratroops, artillery and machine gun crews, and the cavalry. To solve this problem, the M38 carbine was developed. Essentially a shorter version of the M91/30 rifle, the M38 carbine had the same 5- round magazine, bolt action, and similar stock components. This rifle wasn't originally intended for the average infantrymen to use, but still made it into the hands of those riflemen that were lucky enough to receive this lighter rifle. It was never issued with a bayonet, nor ever intended to have one.

Long before the outbreak of WWII, it was realized that bolt-action rifles were quickly becoming outdated. The result of much research and development was the SVT-38, later refined and redesignated the SVT-40 rifle. It was a semi-automatic rifle using an ingenious gas-operated blowback system, firing from a ten-round removable magazine. While initially only seen in the hands of snipers and NCOs, this weapon quickly filtered down through the ranks. Intended to replace the Mosin Nagant M91/30, it never reached the needed production, though it was still quite common in the Red Army. 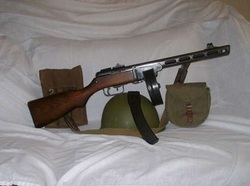 Perhaps the most famous of all the weapons ever used by the Red Army, it also happens to be one of the best. Firing full or semi automatic, using 35 round magazines or 71 round drums, and made entirely out of stamped and folded steel parts with a wooden stock, this weapon was crude, effective, and durable, while being incredibly easy and cheap to manufacture. It is also said to have a slight edge in accuracy over all other submachineguns of the time period.

This is a great weapon to have for Red Army reenacting, though obtaining one can be difficult. If possible, try to run down one of the semi-auto variants out there- several models have been made or are in production. Specifications:
Caliber: 7.62x25mm
Length: 33.2 in.
Weight unloaded: 8 lbs.
Magazine(s): removable, 35-round stick mags or 71-round drum mags

The PPS-43 is a direct descendant of the PPSh-41. It was created during the siege of Leningrad, when certain materials were not available to the encircled city. A prototype was created, made entirely out of machinery located within the trapped city. Thus, the PPS-43 was born.

Mechanically similar to the PPSh-41, the only major changes were replacing the solid wood stock with a folding metal stock, adding a pistol grip, and creating a new barrel shroud. The weapon uses only specially-designed 35-round magazines, as the drum magazines were seen as being too unreliable at the time.

Semi-automatic replicas of these are just starting to hit the market. Like the PPSh-41, it will need to be blank adapted. 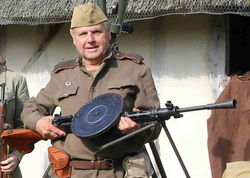 DP28 LMG
The DP-28 was an improvement of the earlier DP-26, both designed by Vasily Degtyaryov. The DP-28 was relatively cheap and easy to manufacture – early models had fewer than 80 parts. The DP was especially able to withstand dirt. In tests it was buried in sand and mud and was still capable of firing more than 500 rounds. The DP's main drawback was its bipod; it could not withstand much abuse and broke easily. Also, the magazine, a pan with 47 rounds that fed in from the top, was relatively small and continuous fire for long periods could not be relied on as much as contemporary belt-fed weapons. Due to the design of the magazine, reloading an empty magazine with cartridges took a very long time. The DP's lower cyclic rate of fire did however reduce the risk of barrel overheating.

Combat experience quickly showed two things in the Red Army: (1)the current standard issue rifle, the M91/30, was too long for use in the crowded house-to-house fighting of urban battles, and (2) a bayonet was needed for all bolt-action rifles, even if it was meant to be used as a last resort- again, needed for street fighting. This last requirement was in response to the M38 Carbine not having any provision for a bayonet.

The Russian weapons bureau quickly solved the problem by combining the already-produced bolt-action M38 Carbine with a permanently attached side-folding bayonet. This allowed the bayonet to be swung into action in seconds, and was always ready for action, while being attached to a lightweight carbine for ease of mobility. After a year of front-line testing, the new rifle was designated the M44 Carbine, and full production was ordered.

This carbine uses a 5-round internal box magazine like all other bolt-action Russian rifles of the time period. It is a lighter, less bulky alternative to the M91/30. A neat weapon to have, it is only usable in later-war battles, when they would have been just reaching the front-line troops.